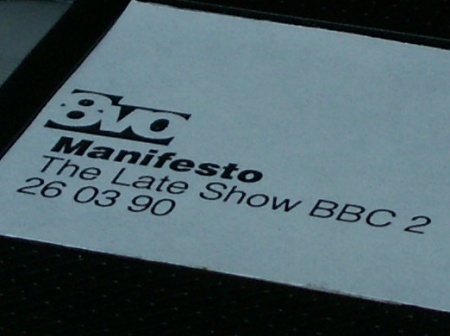 BBC2's The Late Show, 1990; this was a ten minute manifesto/profile of 8vo. They were approached by the BBC to do a piece about English type-based graphics and it developed from there. It was organised around a series of statements/themes such as 'Simplify Design', 'Design Not Craft' and these were introduced by titles (designed by 8vo) and film of the 8vo designers themselves speaking the statements in a layered glass stage set. This was interspersed with shots of 8vo's work (such as Hacienda 4th and 7th birthday posters) and footage them talking about their work. Other Factory stuff featured included the glass structure used to make the cover of 'The Guitar and other Machines' by the Durutti Column. This is a 3 foot square box-like structure featured multi layers of glass and plastic which was photographed from above to create the cover for this splendid album. This featured in a discussion about how to create depth and 3D in design. The comparison was made between someone who uses a drawing of a cube to create the illusion of depth with the 8vo method of using many layers which have physical depth. The Late Show was the BBC's nightly arts strand that sadly is no more (though 'Late Review' still continues to this day). Tracey Macleod introduces the item and at the end she says "8vo - crazy guys!" 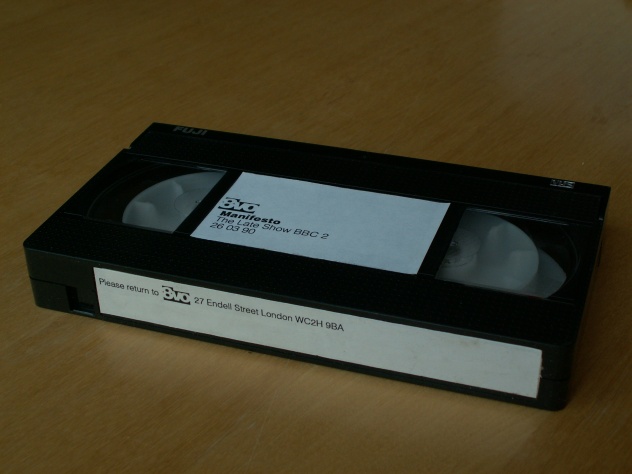 8vo: On The Outside