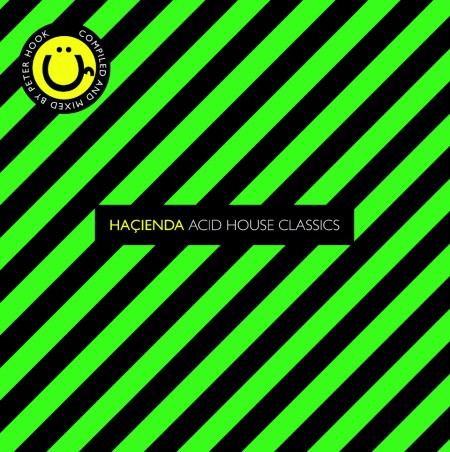 New State Music are proud to release Hacienda Acid House Classics, compiled & mixed by New Order, Joy Division's and The Hacienda's Peter Hook whose 30 year career in the business as a genre-defining bass guitarist and club owner has seen Hooky survive the rock and roll rollercoaster and emerge the other side with plenty of stories to tell. This personal compilation of Hooky's favourite Hacienda tunes is the ultimate collection of Acid House classics, culled from the much-venerated, late Eighties Acid House daze.

One of the earliest acid house nights at the club saw Adonis, Frankie Knuckles and DJ Pierre / Phuture play to a half empty club in 1987 but by 1988 Acid House had firmly established itself as the soundtrack to The Hac as nights such as Hot and Nude, and DJs Mike Pickering, Graeme Park, and Jon Dasilva ripped up the clubbing rule book and changed the face of a musical generation in the process.

What a fuck up we made of it. Or did we? Sitting here now I wonder. It's 2009 and the Hacienda has never been more well-known. This year we celebrate 21 years of acid house and we are holding Hacienda nights across the UK and have merchandise deals for CDs, t-shirts, shoes, posters, even a bespoke bike frame and a fine art project. Where will it end? - Peter Hook in The Hacienda: How Not To Run A Club

Marking 21 years of the genre and the club's seminal involvement since its heady early days, Hacienda Acid House Classics presents a selection of tracks handpicked and mixed by Hooky to portray the definitive sound of Acid House and The Hacienda. Spread over two CDs, this album collates many of the biggest Acid House moments from this time.

Highlights across the album include a new unreleased remix of "THE" Mancunian anthem Voodoo Ray (A Guy Called Gerald), Baby Wants To Ride (Jamie Principle), Washing Machine (Mr Fingers) This Is Acid (Maurice), Acid Tracks (Phuture), True Dub (New Order), Acid Rain (Victor Romeo), Jesus Loves The Acid (Ecstasy Club), and Lack Of Love (Charles B & Adonis). Hooky has also selected later acid house trax such as Higher State Of Consciousness (Josh Wink) and Acperience 1 (Hardfloor) and includes two unreleased tracks of his own, Ways Of Making Music and We're On It (both under the name of Manray).

How Not To Run A Club

FAC 351 The Hacienda Must Be Built