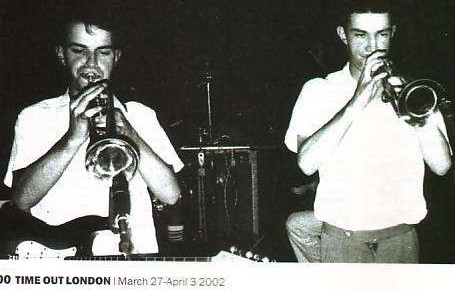 Interview with Martin Moscrop in Time Out magazine, 26 March 2002

To coincide with ACR's gig at Electrowerkz, Islington, London on Friday 29 March 2002, Martin Moscrop (pictured, left) gave a telephone interview with Time Out; mentions how ACR have never split up, his role as technical adviser on 24 Hour Party People, the film by Michael Winterbottom and the possibilities of new ACR material.

'With music, there's usually either a really successful or not successful at all,' says Martin Moscrop of Factory Records' legendary genre-botherers A Certain Ratio, down the line from his native Manchester. 'And it's very hard to survive in that middle ground. We've been through a few big phases - before we even released our first single we were on the cover of the NME - but most of the time we've been mid-ground. We're like Villa, one of those teams that stay in the middle of the table forever. You don't normally get that in music. But we've made 16 albums, 54 singles, been on 18 compilations. We might not have had chart success, but we've been successful, y'know, artistically.'

Never heard of ACR? Some facts then. Along with Joy Division, they were the first signing to Tony Wilson's Factory Records. They're Andy Weatherall's all-time favourite band. They played post-punk. And jazz. And funk. And electro. And Latin percussion. And sometimes perfect pop. As new compilation album 'Early' proves.

More? Onstage they wore shorts and uniforms. So some people thought they were fascists. But they didn't know what fascist meant. They had a black drummer and collaborated with South Bronx art-funnksters ESG. They were big in New York's clubs. They even had a US R&B Chart smash. And they're playing their first London show for three years on Friday. Weatherall is DJing. Should be a very good Friday.

Not that this is a reunion. Since their conception in 1978, ACR never split. The current line-up is unchanged since the mid-'80s and Moscrop is one of three original members. They've got day jobs (Moscrop is a university lecturer) but they're still together because they still love music.

'It doesn't feel like 24 years at all,' says Moscrop. 'I still go out clubbing and I've never stopped being part of the Manchester music scene. And when you're involved in things all the while, you lose track of time. Or maybe that's just all the acid I did in the'80s.'

ACR may not have set the charts alight themselves, but they helped one young hopeful on her way.

'Madonna did her first gig supporting us at the Danceteria in New York. The management her on to the gig

- they actually paid us 100 USD for her to support us. Sire records came down to see her and she was signed from that gig.'

With the release on April 5 of the Factory Records film, '24 Hour Party People' (on which Moscrop actually worked as 'musical technical supervisor', ensuring that the actors looked convincing as musicians) a whole new audience will be exposed to ACR.

'Yeah, we're in it twice. But both times we get slagged off,' chuckles Moscrop.

Disappointingly - although their music features more prominently in the film than New Order's - ACR aren't on the film's soundtrack.

'I'm a bit pissed off about that,' admits Moscrop. 'But I think it's 'cos when Factory went bankrupt, London Records gained all the ownership of all the Factory stuff. But they didn't gain ownership of us, because we'd been to Factory the week before and taken all our master tapes, 'cos we heard they were going bust.'

When the receivers arrived a week later they only owned the tapes on Factory's premises, leaving ACR in control of their own music. This may well explain why London decided not to put them on the film soundtrack.

The plan is to follow the Easter weekend gigs (they also play Manchester on Sunday) with their first new material since 1996's 'Change The Station', possibly through Fila Brazilia's Pork label. Moscrop sounds genuinely excited at the thought. And you can guarantee the new music will be anything but middle-of-the-road.

So how have they managed to stay fresh and together for so long? 'There's a chemistry within the band that you very rarely get with a bunch of people,' says Moscrop.

'We've never fallen out. Never even come close to splitting. If we were boys and girls it'd be the perfect marriage made in heaven.'