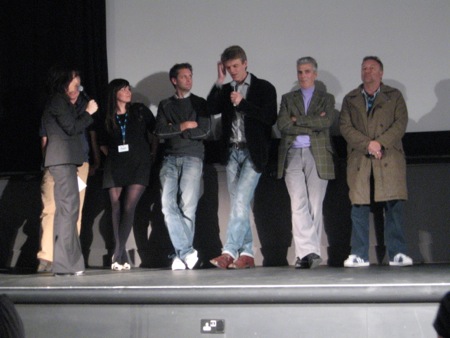 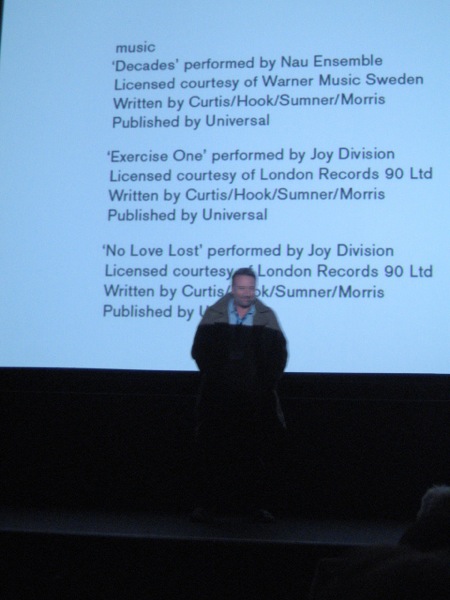 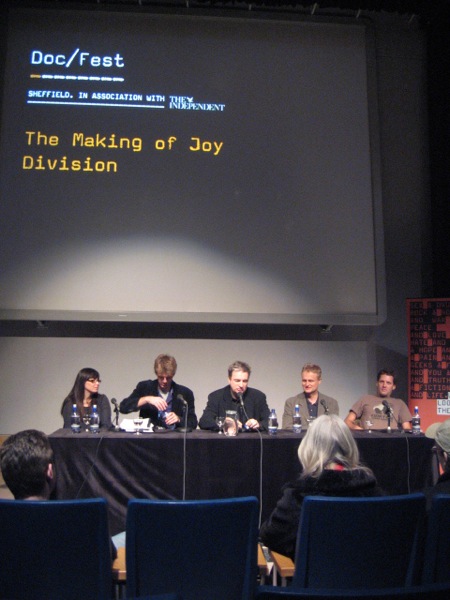 In 1976 four young men from ruined, post-industrial Manchester went to see the Sex Pistols. They formed a band, Joy Division. Three years later the lead singer, Ian Curtis committed suicide just as they were on the brink of worldwide success. Together Gee and Savage investigate why Joy Division's collective musical genius and singular vision enjoys a larger audience and influence thirty years on.

Featuring the unprecedented participation of the surviving band members of Joy Division, now known as New Order, the film chronicles a time of great social and political change in England of the mid-70's and tells the untold story of these four men who transcended economic and cultural barriers to produce an enduring and profound legacy, one that resonates fiercely in today's heavily careerist music industry and over mediated pop culture.

The band's remarkable story is depicted through atmospheric never-before-seen live performance footage, photographs both iconic and personal, period films and newly unearthed audio tapes; taking us through the band's early years as individuals finding their voices and then later as a band, building their ideas and ideals. The documentary situates the band not just in the musical context of punk and post-punk but in the culturally starved, claustrophobic landscape of post-industrial Manchester that surrounded them and suffuses every note of their music.

This unparalleled visual account of a time and place is coupled with heartfelt and animated, present tense accounts from the surviving members of the band Bernard Sumner, Peter Hook and Stephen Morris, plus other key characters in the story, including friend and similarly isolated musician Genesis P. Orridge, the late legendary Factory Records owner Tony Wilson, iconic graphic artist Peter Saville, photographer / filmmaker Anton Corbijn, Annik Honoré and others.

The film premiered at the Toronto International Film Festival. Salon.com reviewed the film following that screening. The review highlights director Grant Gee's technical and creative abilities, saying: "He has a knack for nonfiction storytelling: He never resorts to frenetic editing to capture our attention, nor does he bore us to death with expository voice-overs. The performance footage captures perfectly the weird magnetism of the band's live performances. The year 1980 may seem like a long time ago, but Grant's picture is so immediate, and so alive, that it may as well have been yesterday."

There are three short blipvert videos on MySpace to promote the forthcoming official Joy Division documentary.

European Premiere at the Sheffield DocFest

Such was the popularity of the event and the resultant demand for tickets, last night's European premiere of the Grant Gee Joy Division documentary at the Sheffield Doc Fest was shown in two cinemas simultaneously to over 500 delegates, punters and guests - before being shown again shortly afterwards.

Among the audience were Richard Kirk, Jon Savage, Peter Hook, Rebecca Boulton and the Lord and Lady Mayoress of Sheffield.

Immediately following the 97 minute HD showing of the excellent documentary, Savage and Hooky were joined onstage by members of the production team - Grant Gee, Tom Astor, Jerry Chater and Jacqui Edenbrow - for a short Q&A session.

Hooky pontificated as to how the documentary was the "perfect answer to Control", that the interviewing of the band before Control went into production and marketing had been important, that New Order playing old Joy Division songs was "like being given a new toy", and that as a result of the recent Joy Division activity he had realised how good they actually were.

"Tell that to the Arctic Monkeys!"

Jacqui Edenbrow revealed that the documentary was to go on cinematic release in early 2008 and had been sold in 15 territories, with The Works distributing in the UK and the Weinsteins in the US.

Many thanks to Hooky and Jacqui for the ticket and Sheffield Doc Fest themselves for hosting the event - the opening night of a programme of screenings that made this contributor wish he had a full delegate pass and five days holiday! (example).

'The Making of Joy Division': a masterclass

From The End To The Beginning - The Joy Division Films