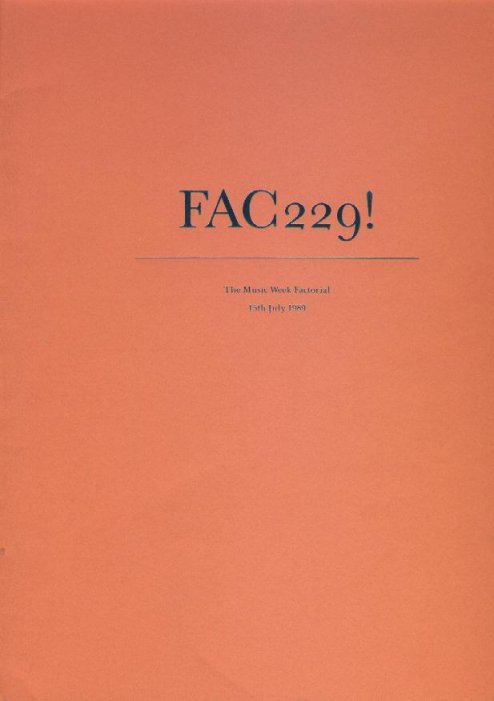 Designer Peter Saville first met Alan Erasmus and Tony Wilson in Manchester in 1978 during his final term of college studying graphic design. "I wanted to do music-related work an album cover or poster. My closest friend at college was Malcolm Garrett who'd started working with the Buzzcocks. I pestered, their manager, Richard Boon, who eventually told me that Tony Wilson was opening a club. I did the first posters for The Factory, it followed on from there."

From 1979 through to 1986, Saville shaped the perception of Factory as much as Joy Division or New Order. His reputation as an extraordinary designer grew on the back of sometimes enigmatic, other times painstakingly luxurious, but always individual and innovative album sleeves. Saville also free-lanced - with Ultravox, OMD and Roxy Music being among his clients, "but since then, I've run that side down, from 10 to maybe two or three albums a year. This year, we've done New Order's Technique and the Paul McCartney album. I don't think you can be a record cover designer at 30 and certainly not at 40 (he's 34) because I don't want to be condescending - it's impossible to sit down in a studio and think what a teenager will want - it has to be what I would want. I design for myself for me, because that's the only way that I can work.

"The relationship with Factory and New Order is different - it's not like working in the music business at all. They give me carte blanche to do what I want - a vehicle for ideas, experiments and concepts, while the other areas we work in now are not so open or free. We design identities for art galleries and companies, ... that's more the reality of graphic design, solving problems for people rather than making personal statements on white paper."

Saville's dedicated approach has landed him the blame for Factory's notoriously unpredictable release schedule. "It's only in the last year that Factory have had the pressure on them to perform in the marketplace. Before, records were released when they were released. But as New Order have sold more, the more they're involved in the system. Stores want to know when the records will be in. Any artist, whether a designer or musician, is pressured by a manager or client. Factory rarely apply the same level of pressure as, say, Virgin, (Peter Gabriel's SO), or Polydor (Roxy Music's Flesh And Blood).

"I'm not automatic - designs evolve. Usually, there are discussions with management, the record company and the band as to what a sleeve is going to be, and a decision is taken. With New Order, I have to decide what it's going to be, and the band leave us to get on with it. I express something that I'm interested in. This year, designing Technique, I was interested in shopping - for antiques."

The band of course can add to the delay; 1986's Low-life concept of, "no concept -just photos of them," was initially rejected, leading to another six-week delay ("I've made a cross for my own back with New Order album covers"). Nineteen eighty-nine's antique theme was only finalised after exploring other avenues - "more pop, like dollar bills, pineapples, bananas, sixties art images. In the end, we came up with a pop art antique. For the last two to three years we've been developing a process that's like photographic silk-screening. We bought the antiques and put them through the process. We make it up as we go along. Even if I have a concept, it takes weeks to get there."

Peter Saville Associates current project, a New Order magazine, initially for their American tour and thereafter for retail, still wasn't finished a week before the group were to leave. Factory's new classical label is an important project. With a specialist market, the budget is lower, so the sleeves will have a practical house style, "like a 'Deutsche-Grammophon'. It has to shape itself in people's minds . The idea is different to our pop records. We are giving the musicians an identity. Our pop records were designed in an abstract way and now we're going to do classical records in a pop way. All the musicians are young, living, working and playing, and traditionally, classical music doesn't have that personal identity. It's ironic really because when I was doing pop sleeves in my mid-twenties, I wanted to do them like classical sleeves."

It's been 10 years of excitement, experimentation and rows... "Tony and I have had incredible rows, mainly about things being late... but we've never wanted to stop working with each other."

Could Saville identify what was the most special aspect of Factory? "One of the quotes we thought of putting in the New Order magazine is Rob saying he's always believed in the punk ideal, that if you want to do something, then you do it. Basically, that principle that brought us together has continued to apply over 10 years to everybody at the core of Factory. If you want a classical label, or a club, let's have one. It's believing in what you do. The Hacienda was an outrageous idea when it started, and it took years for it to prove itself, but it's done so now. There isn't a club like it here in London, but it only happened because some people actually cared enough to open the kind of club that they themselves would like to go to.

"Sometimes there are problems because of what the music business is like - the pressure is there for you to just produce. It means so much more when you can believe in the product."

The Music Week Factorial was designed by Peter Saville Associates