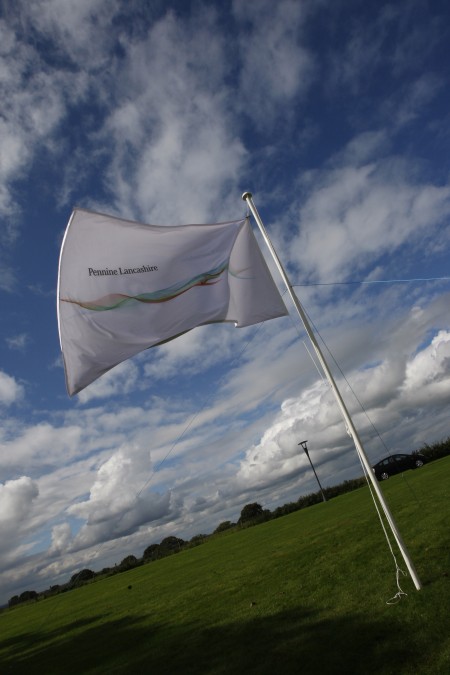 Northwest communications agency Creative Concern has completed a new brand for Pennine Lancashire, working with design guru Peter Saville and Livesey Wilson Associates. The brand has been commissioned by Elevate, Pennine Lancashire's Housing Market Renewal pathfinder and will be used both as a 'flag' under which regeneration projects will be taken forward and as a more conventional destination brand for the area.

Steve at Creative Concern explains Peter Saville's role in the Pennine Lancashire Project: "Peter was Creative Director for the project and worked with us and with Tony and Yvette at 3 development sessions for the new brand. He also directed our design team in finessing some of the ideas for implementation of the brand."

Creative Review has an extensive illustrated interview with Saville about the development of the, dare we say it, branding.

Launched on Monday 17 September in the hills above Blackburn, the new brand is made up of a new graphic device called 'Contour' and a type treatment for 'Pennine Lancashire' that will be used by a host of partners across the areas of Blackburn with Darwen, Burnley, Ribble Valley, Hyndburn, Pendle and Rossendale.

The project was first conceived in the 2005 report 'Dreaming of Pennine Lancashire' which was written by Anthony H Wilson and his partner Yvette Livesey, both of whom played a central part in the creation of the new 'Contour' brand.

Speaking at the launch, Creative Concern Chief Executive, Steve Connor said: "A place brand has to represent the truth of environmental and social connections that the individual will make when there. Our new brand for Elevate and the partners across Pennine Lancashire has primarily been designed to inspire, engage and empower the people of the area to continue their work towards an economic and social renaissance. It is as much about pride as it is tourism."

Elevate Chief Executive, Max Steinberg said: "There are some amazing projects emerging as part of the Pennine Lancashire initiative, including a Fashion Tower, now known as 'Weave' that is being developed by Ralph Radill. This new and inspiring brand will be the flag we fly over those projects. It will lead our partners and our communities towards the renaissance described by Anthony Wilson and Yvette Livesey in Dreaming of Pennine Lancashire."

Max Steinberg also paid tribute to Anthony H Wilson: "Today was also a celebration of what is just a small part of Anthony's amazing legacy. The Weave project and the new brand were initiatives that he felt enormously passionate about and that he gave a huge amount of support and inspiration to. The wider Pennine Lancashire project will forever be a tribute and testament to his vision."

The new brand for Pennine Lancashire has been created by the design team at Creative Concern, a Manchester-based multidisciplinary communications agency that specialises in sustainable development, regeneration, culture and the knowledge economy. The brand development process was directed by Peter Saville, the international designer and brand consultant and Anthony Wilson and Yvette Livesey were key consultees and advisors.

In June 2005 Wilson and Livesey published their 'Dreaming of Pennine Lancashire' report for Elevate, outlining a series of 'consummations devoutly to be wished'. Their aspirations for a new, regenerated East Lancashire included a Fashion Tower, an Adrenaline Gateway, Chic Sheds, a new wave of public spaces conceived by international architects and urbanists and the new brand for what they had termed 'Pennine Lancashire'.

The graphic device conceived by Creative Concern is called 'Contour', a panoramic fusion of multi-coloured contour lines that does more than just replay the landscape of the Pennines that represents such an important framing element for communities across Rossendale, Burnley or Blackburn... it also suggests other important dimensions of Pennine Lancashire such as weaving, canals and rooftops. The lines of Contour are not static. They form a range of shapes to become suggestive of an urban landscape, for example, or of a lowland area bounded by canals or waterways. The ribbon-like shape of the graphic helps to inform its deployment and suggests a variety of uses from panoramic boundary signs to illuminated fascias, gatefolded print and 16:9 screenshots.

The new Pennine Lancashire brand also includes a type treatment based on Res Publica Medium, a face that was selected as a modern take on the traditional serif and that would prove bold, robust and readable when used across a very wide variety of environments. It also provides a strong and solid anchor point for the more lyrical and dextrous graphic element of the brand.

Articles on the development of Pennine Lancashire were published in The Guardian on 15 June 2005 from two years ago, 16 September 2007.